Ruth Thomas was born in Sydney in 1902. She a graduate of Sydney’s Fort Street School and continued onwards to Sydney University to study psychology and, in 1923, the founding year of the Australian Society of Psychology and Philosophy, runner up in an essay competition adjudicated by Professor Francis Anderson. The winning essay, ‘The Relation of Repression to Mental Development’ by a Mr Cunningham from the University of Melbourne was published in the Association’s journal. Sadly, Ruth Thomas’s essay, nor the title were published.  On 3 February 1924 the Social and Gossip Column in Perth’s Sunday Mail announced her impending arrival as a lecturer at Claremont Teacher’s College – also under the directorship of Robert Cameron.By 1933 Perth had claimed her as its own. She was moving further afield, the newspapers announced,  she moved to London to take up the post of Principle Lecturer in Education at St Gabriel’s College in Camberwell. ‘Rarely are Australian’s so well treated’ wrote the editor of the Daily News in October 1933. Ruth Thomas had written to her friends who passed her letter to the paper. It was published in full. it is a digression, but reveals some of the liveliness of this woman who seems to be soaking the old world and its beauty into her being..

‘I have just spent a week-end at Cambridge, which is lovely. We went over Trinity and King’s on a wet Sunday afternoon. One or two punts were out on the river in spite of the weather, and the light falling through the woods along the parklands where most of the colleges ‘back’ in (so, Cambridge ‘Backs’ they are called) was almost green as it fell through the bright colors of the new trees. I’ve seen nothing like it before. You’d laugh at it on canvas as unreal. It was fun to see the solemn young undergraduates in grey flannels and brown Norfolk jackets pacing about with the inevitable pipe. I guess they’re luckier than they know.

All was of consuming interest, even where she lived..

‘I have ‘digs’ of my own over-looking a lovely square just off the river and ten minutes from everywhere. I climb solemnly up four flights of very dirty stairs, with the odor of last century’s cooked eggs, and purple wallpaper. At the top I’ve managed to set up some thing like a decent ‘diggings.’ My room is 16ft. by 13 ft., newly done out in cream, and with a built-in wardrobe. Hence it was easy to make it look like it a study. I have a nice Davis carpet, very oriental, in orange and fawn, and ‘ a low divan you’d never recognise as a bed, bookcase and a desk, and other I whatnots, scoured from the Jewish shops in Fulham Road. The scouring required when I got them was another matter.

Perhaps London life at last sated Ruth’s hunger for the arts and culture, and a bit of ‘star spotting’.

‘The other night I went to all night place where artists congregate, for beer and food, and had a table near [the writer] Beverley Nichols. He is what you’d imagine — long and fair and thin — in immaculate evening dress, and with the air of the very modern young man. ‘Alfred Noyes [the poet] is quite different. I went recently to hear him on religion and poetry in a lunch-hour lecture af St Martin’s-in-the-Fields. He has a lovely voice and recites poetry like an angel, but he has also an illogical mind. His matter was horrible. It interested me to hear him say Shakespeare’s greatest line was ‘Ab- sent thee from felicity awhile.’ I shouldn’t have thought it. He is fat and very forty-ish, with a few hairs pulled across a quite bald head, wears large glasses and double-breasted suits. It seems a pity, for the’ author of [the play] ‘Sherwood.’–

For ‘native-born’ Ruth, London was a place of firsts, of seeing sights and artwork hitherto read about in books; the subject of daydreams. There was an exhibition of artwork, murals by Frank Brangwyn commissioned by The House of Lords as a memorial to the Great War ‘Quite the acme of my artistic life here have been the Brangwyn Panels’, Ruth continued.   They were, originally painted for the walls of one of the galleries in the House of Lords as a war memorial, and range from ten to twenty feet in height. The Lords could not see that they were a war memorial, and turned them down after the artist, Brangwyn put nearly ten years’ work in them’. Only five of the eighteen proposed were completed.  The Brangwyn Murals have been uncovered by devotees of lost art….I have found three – also published via the web.

Here are three of the murals Ruth saw at the exhibition. 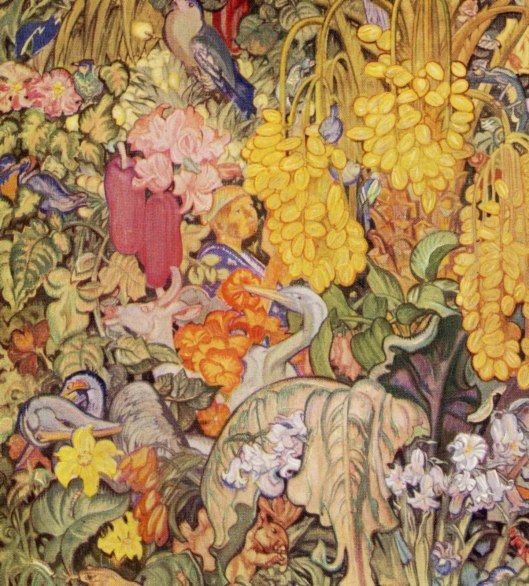 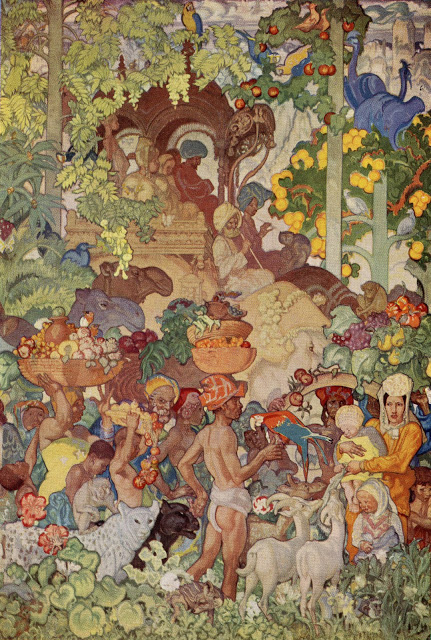 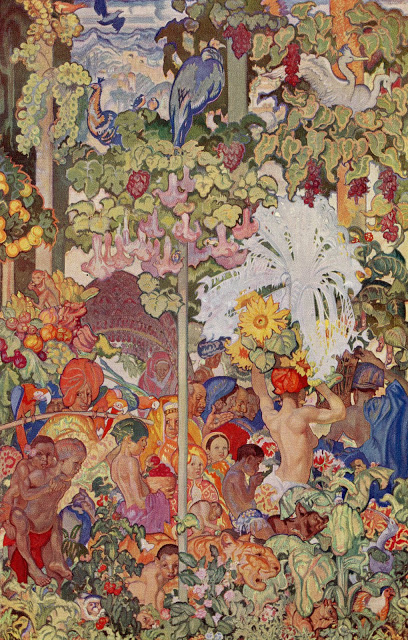 Ruth Thomas continued: “He strikes the note of actual warfare only, in relation to all living. The riot of life, struggle for power, parasitism and greed, sex, mother love, and pleasure are all portrayed in a most exotic symbolism and the brightest and most exhilarating of greens, blues and oranges. He contemplated, too, a modern panel, with industrialism and luxury in contrast, but there is only a rough sketch of it. It is now thought they will be bought by America and the Lords wont wake up until 2050”.

In September 1937 Ruth Thomas returned to Australia to attend the New Education Fellowship Conference then being held across Australia – after an initial stint in New Zealand. Susan Isaacs, a follower of Melanie Klein, was a keynote speaker. By this time Ruth was on the staff of the London Child Guidance Clinic.

When war broke out in 1939 Ruth Thomas was amongst those recruited by Dame Evelyn Fox to advise on the needs of evacuated children. Others included the psychoanalyst Donald Winnicott and John Bowlby. As had Winnicott, Ruth Thomas addressed ‘ordinary mothers’ on the needs of children via the BBC. By 1943 she was in charge of a children’s home in Pusey in Wiltshire. She wrote a memo which was included in the  1946 ‘Curtis Report’ – “Children Without Homes”. Its recommendations instrumental in the development of substitute care in the United Kingdom – and a decade later in Australia, in the Victorian State Government’s 1954 Children’s Welfare Act.  after the war. These all brought her into contact with Anna Freud who was also working with displaced children, including a group from European Concentration camps.  There were practical considerations alongside the psychological. Money and goods were scarce. Ruth sought contributions from the folk at home. One such was published in 1947.

Miss Thomas desires clothing that may no longer be needed -knitted woollies, jumpers and cardigans, little boys’ trousers, socks, underwear and old cloth ing that could be cut down. Parcels may be sent to “Miss Ruth Thomas, I Cornwall Gar dens, London S.W. 7.” They must not exceed 11pounds ( weight) or £5 in value, must not contain over 21b. of knitting wool, must be clearly marked “Gift” and a statement must be attached giving details and value. The sending of piece goods in parcels to England is prohibited.

When Anna Freud began a training program at her clinic in 1947, Ruth Thomas was appointed as a training analyst and as a lecturer. In an appreciation published in the Journal of Child Psychotherapy  after her death in 1983 it was noted that ‘her seminars on ego and ego development were models of clarity’. She was much sought as a supervisor; was tough, kindly with high expectations of her students….

There is always going to be migration to and fro, knowledge transmission leaving and coming to Australian shores. Perhaps it is a manifestation of transnationalism, and, as Australian historians begin to explore the possibilities within this concept, it implies a movement away from a defensively assertive independence as the influence of the mother-country is to be shaken away to recognition that we are part of something rather more global….